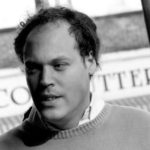 Lavie Tidhar (1976) is a writer and an editor. Born in Israel. For long periods of time, he has lived in the United Kingdom and South Africa, and in Vanuatu and Laos. He is the author of Osama, The Violent Century, The Bookman Histories trilogy, also of one collection, HebrewPunk, as well as of numerous short stories and novellas. Mr Tidhar is the editor of The Apex Book of World SF series of anthologies and the anthology A Dick & Jane Primer for Adults. Winner of the World Fantasy Award for Best Novel (Osama), the British Fantasy Award for Best Novella (Gorel & The Pot-Bellied God), and the BSFA Award for Non-Fiction (The World SF Blog). Vladimir and Petar asked him a few questions for our readers.

An Interview with Lavie Tidhar

How do you write?

Not very exciting, I’m afraid. Because of all the travelling, I’ve been using a series of laptops as I moved around (some of them have been on boats, small planes, I think I ended up dragging one on a canoe at some point). Otherwise I just get up and eventually settle down to write, or at least to staring vaguely out of the window. One year I only had a fake window! The other, I’m staring out at a live volcano. Another year it could be a car park, or an old armaments factory. But the basic work stays the same. Eventually all you do is stare at a small screen. I like to think I lead a very boring life in interesting places!

What got you into the literature of the fantastic? Any particular works and authors?

I got into it as a child, reading a lot of classical children fantasy, a lot of European translations – Michael Ende, Astrid Lindgren, Tove Jannson obviously – I guess I was always attracted to the weirder stories, but I read pretty much everything there was in the library. I can’t honestly say why I gravitate towards the weird or the fantastic – from an adult perspective, I could justify it by saying that it provides a way of talking about reality, but that’s after the fact!

Do you think that the fantastic approach gives the writer a better chance at understanding the real world or is it simply an easier way to explore various concepts?

I think, in one way, it’s a useful way to talk about real world events and issues, yes. On the other hand, I think it also offers something new, a way of talking about things that could happen, a way of imagining possibilities. We live in a science fictional world, and the future’s only going to get weirder! I think it would be mad to not write about that.

Your latest novel, The Violent Century, has been described as “demanding” and “breaking new ground”. Tell us more about it. Why did you decide to write a superhero novel? Was this your most challenging project?

I never liked superheroes much. I have no patience for it at all. It was a chance remark by a friend of mine who’s a film producer that got me thinking about it – I wanted to get back to the origin of the concept, which comes from young Jewish American writers in the 1930s, the children of immigrants under the shadow of the coming Holocaust. So for me it was a way of talking about the 20th century, and about the Second World War, and to try and examine the whole idea of the “hero”, which is something I’m more than ambivalent about.

It was challenging, in that it was the most intensive writing experience I had – a lot of drafts, a lot of different forms of writing – it began as a screenplay, at some point I was hoping to do it as a comic mini-series, the novel itself went through multiple versions – overall I think I’m happy with it, though I’ll forever think of it as my “accidental” book!

While working with writers of different nationalities, were you able to “peek” into the traditions of the fantastic in their cultures? Did you see any common traits? Can you tell us about any surprising and impressive characteristics you’ve discovered?

I don’t know if that’s a useful thing to say. Good writers obviously draw on their own cultural background and influences, but I wasn’t looking for something that necessarily tried to “represent” the author’s culture. Some of the stories are firmly rooted in geography and language, others could be set anywhere, and that’s how I wanted them. I think it confuses Anglophone readers sometimes – that they can’t point to a story neatly and say, “Well, that’s obviously a Chinese story” and so on. But we hardly ever go “Well, this is obviously a representative of American SF”, do we? We just say it’s an SF story. It’s American by default.

Was it hard for you to put an end to The World SF Blog project? What would the site have become if you had continued to develop and work on it?

I ran the site pretty much single-handedly for four years (I had a lot of help from Charles Tan, and from my fiction editors, but essentially, to keep it going on an almost daily basis for four years, it was just me and a computer!). So it was maybe a little hard, but it was also time! I don’t know if I could have done more with it than what I set out to do. I think there is certainly room for new sites, new magazines, to follow and expand on that tradition.

And I’m still editing, you know, the third Apex Book of World SF is coming out next year, and I’m still administering the World SF Travel Fund, which helps people financially to travel to a major industry convention (World Fantasy Con), and I’m still quietly recommending writers to editors, you know, that sort of thing… and the blog is still up there – do you know, we get the same number of hits, still? It’s such a useful resource, people still find it and still use the material there, read the stories.

The last SF or fantasy story you read online that made you go “WOW!”?

I’d say pretty much anything by Benjanun Sriduangkaew, who is a new Thai writer doing some amazing work in short SF/F – her latest is “Silent Bridge, Pale Cascade” in Clarkesworld Magazine.

What are you reading at the moment?

I just finished Ned Beauman’s The Teleportation Accident, published last year – I thought it was wonderful.

What are you working on at the moment?

I’m trying like mad to finish off a bunch of projects before the end of the year! I just did the edits on my collection of linked short stories, Central Station – stories set in a far-future Tel Aviv and following a large extended family. They’ve been published individually in places like Interzone and Analog but I always meant for them to appear together.

I’m just about to face up to going over the manuscript of my new novel before sending it to my editor. Then I have 3 more issues of my comic mini-series, Adler, to script. This is coming out late next year – I’m very excited about it!

What would you like us to ask you in our next interview with you?

Well, like I said above, I’ve got my first mainstream comics title coming out next year – it’s called ADLER and it’s with artist Paul McCaffrey, published by Titan Comics – I think it’s going to be very cool. So I’ll be doing a lot of talking about it as soon as I can…

And thanks for having me!